Worldwide Development Corporation challenge to U.N. and every country on the planet

20 times cheaper than wind or solar

5% the cost of wind or solar

This challenge is directed to the United Nations

If you are serious about solving climate change 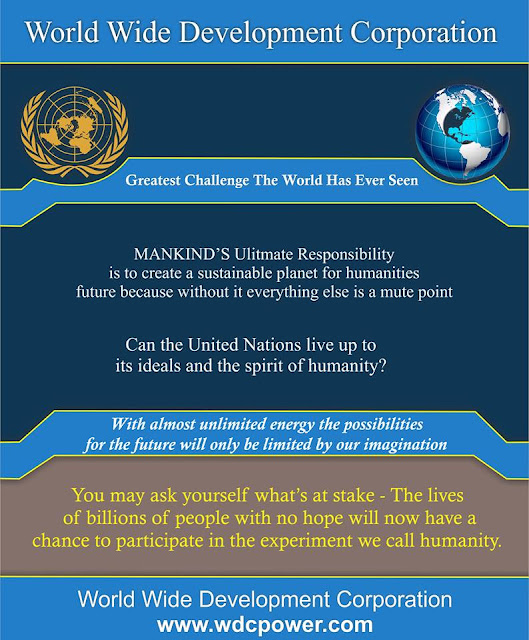 Mankind’s ultimate responsibility is to create a sustainable planet for humanities future because without it everything else is a moot point.

This challenge will determine if the United Nations is an institution that is willing to lead in the future of humanity or just a body of Nations jockeying for power and influence. I've now added GE and/or Siemens to the challenge if they are brave enough to step forward.

Unlike the power generation capabilities the cost estimates of the new energy invention is subject to variances and manipulation. Because of the huge amount of effort required in estimating the cost and the differences in material selection it was necessary to use an “order of magnitude” cost estimate. We estimated the cost to be approximately 400 million dollars a gigawatt of firm 24/7 electricity. Even if were off by 50% and the cost is 600 million dollars a gigawatt of firm 24/7 electricity it would be a miracle.

We believe this new energy invention will be the basis for a sustainable planet for humanity theoretically forever. Energy is the key to solving almost all of humanities issues from water shortages through desalination, climate change, smog, elimination of the need for fossil fuels that are limited resources, reduction in all types of pollution, to almost any problem mankind will encounter in the future.

As stated above the cost estimates of the new energy invention is more difficult because of the ability to manipulate the cost variances in material selection, etc. For this reason I decided to lower the challenge to a more reasonable difference in electricity generation comparisons even though we believe the differences will be much more extreme.
·

Note: Actually we believe we can generate electricity 30% cheaper than any electricity generated today and up to 10,000% cheaper then wind or solar. The only reason why were not using the real expectations is because we could be off by a small amount on our estimates and we wanted to make sure we pass the challenge.

If this challenge is accepted by either a group of member countries of the United Nations or the United Nations body itself then I will bring in a large U.S. based international law firm to write up the contract and formalize it with the participating parties.

The contract will contain all the above challenges and will be subject to a large reputable 3rd party verification of the challenges. The 3rd party must be a world renowned engineering firm similar to G.E. and/or Siemens that is well respected in western democracies. The 3rd party engineering company must also be willing to partner with the Worldwide Development Corporation along with the group of countries and/or the United Nations.

The Worldwide Development Corporations business plan is to collect 10% royalties on the energy generated worldwide from this new energy invention.

We have created an implementation plan for New York City that demonstrates the capabilities of this new energy invention to be 99.9% reliable. The implementation plan illustrates the new energy invention backup capabilities, expandability, elimination of wide area network blackouts and finally even greatly reduces cyber attack vulnerabilities. All the above capabilities are necessary to be dependent on only one energy source.

The “order of magnitude” cost estimate for the reduction in electricity grid technology is in the range of 30% to 50% over time once the electricity grids are transformed to handle the new energy invention.

This may seem like an unorthodox way in an attempt to introduce and implement a new technology but with all the corruption and the importance of this new energy invention I have no other choice. I would have given it to the world for free if there weren’t so many inequities and injustices throughout the planet.

One of my biggest concerns is all the time the world is wasting on attempting to implement energy technology that is so ineffective it would eventually destroy mankind’s future. Oil is so important to humanities future because of its ability to make plastics. The world continues to consume oil at an unprecedented rate that is unsustainable. Without plastics a modern society couldn’t exist and without a modern society the world couldn’t sustain billions of people.

You may ask yourself what’s at stake.

The lives of billions of people with no hope will now have a chance to participate in the experiment we call humanity because access to electricity is the same as wealth.

Acceptance of this challenge:

I have never asked anybody for a penny during this entire 13 year endeavor. My intentions are honorable and the technology is real. I still require no money but I do require cooperation in putting together a responsible partnership that will have the ability to create not only a sustainable world for mankind but one that is fair and just where everybody on the planet has hope and a chance for prosperity.

The Worldwide Development Corporation is willing to give up the rights to the new energy invention if it can't complete the challenge stated above directly from the engineering, prototype and 3D drawings, etc. already completed.

This challenge should entice every country in the world to join in this partnership. Putting everything at risk over such an outrageous challenge says everything about the confidence the Worldwide Development Corporation has in this new energy invention.

Please contact me if you’re a country or a representative of the United Nations by sending me an email.

Posted by John Rosebush at 1:12 PM

Hello John, I would be happy to sign an NDA and look over your Executive Summary.

One of the 3D drawings is a simulation mode that shows the new energy invention in operation similar to a Disney movie. The Engineering is world class.

I have never asked for a penny during this entire 13 endeavor and that's why there is no executive summary.

An NDA is not worth the paper its printed on.

The United Nations challenge was established for two purposes. The first purpose was to eliminate any skepticism by putting the entire company at risk over a challenge that most scientist think is impossible and to show the capabilities of the new energy invention.

The second reason was to gather very powerful partners that can protect the invention's patents once there submitted around the world. We know the new energy invention will help all countries around the world through cheap energy. But to create a healthy sustainable world the bottom half the world will receive additional help through royalties. This is critical if we want a more fair and balanced world economically where everybody has hope and a chance for prosperity.